Iron is one material important to Rosedale that is not yet properly is represented within Hanging Stones. Whilst the ‘red’ of Red Wall is caused by iron present in the ground it does not deal with iron directly. The challenge has been to find an idea that talks about iron as both a raw and a manufactured material.

Historically, Rosedale has long been a source of iron and yet for a place called the Land of Iron it is very difficult to put your hands on a piece of iron stone. I had to go down the mines at Kildale to see for myself what iron stone looks and feels like. There are many experiments that I would like to do with iron stone itself but for this proposal I would intend to use iron in the form of rusted barbed wire.

Barbed wire is common to farming but also to many other places and uses. It is an emotionally charged material that would bring to Hanging Stones a different material as well as a different way of looking at the land and its connection to the wider world.

Ebenezer and Thorn House would be partners within Hanging Stones. Thorn and barb; Hedge and fence. The interior of both houses would be simultaneously beautiful and threatening – appropriate for such a historically rich and complex landscape, which in my view resists contemporary attempts to portray it as a tranquil idyll.

The interior of Ebenezer would be so densely covered with barbed wire that it would appear as a flowing single mass of iron. Only as the visitor’s eye adjusted to the light inside of building would they recognise it as barbed wire. At best, it would initially be perceived as a weaving.

People would pass through an exterior of stone into an interior of iron.

I had hoped to collect old barbed wire from farmers’ yards and dumps where I have already located plenty of old galvanised barbed wire, sheep netting and even heavily rusted wire without barbs. There is, however, surprisingly little completely rusted barbed wire.

There is certainly plenty to be found on fences that are in need of replacement so fencing contractors might be a good option.

The images of a work shown here that I recently made in Santa Fe in New Mexico would give some idea of what it might look like – except that instead of branches the interior of Ebenezer would be clad in rusted barbed wire. My intention at this point is to also cover the ceiling but I may decide to stop at the walls – in which case the ceiling would be clad in wood.

Whilst the wire would be laid in layers several centimetres deep, I hope to clearly articulate the interior shape of the room. The junction between the barbed wire and stone door would be an important detail and would be similar to what I achieved in Santa Fe in that the wire would disappear behind the stonework. The wire, in effect, would be appear endless.

The drawings show the wire being tightly stretched across the walls – I may however weave it less tightly so as to create a more organic texture – more like the Santa Fe work shown here (made with branches).

There are no windows in Ebenezer so the only illumination would be from the open door.

Recent excavations made under the supervision of the archaeologist revealed that the original door was more centrally placed in the building (see image), and we would revert to this position when we come to rebuild.

From a practical standpoint the barbed wire would be stretched over and around a metal frame fabricated within Ebenezer. The wire would need to be laid deep enough to conceal the frame.

The steel frame would also support the roof and provide an elegant way to cover and protect the building without disturbing or adding any weight. This would allow more of the original stonework to be kept in place. This is particularly important for Ebenezer. I love the rough but beautiful dry-stone construction.

My hope is that the only parts that would require complete rebuilding would be the doorway and gable end – both of which are largely collapsed.

The roof would be made of corrugated sheeting painted black – typical of other agricultural buildings in the area.

This idea was one of two proposals made for Hither House in 2015. At that time, it was difficult to decide which of the two proposals to take forward. The two ideas were conceived more as a pair than as alternatives, so I am delighted that I might now have the opportunity to make both works – even more so because of the close proximity of one building to the other.

The two houses will form a single entity within Hanging Stones and I look forward to the dialogue between the cold wet and dry warmth of the two houses.

I will often turn the idea of a shelter on its head. Instead of the security normally associated with a building, I have introduced elements of discomfort, even threat. For me this is a way of saying nature is everywhere. Indeed I have found that the placing of outdoor elements and materials inside a building can make them ‘larger than life’ and more intense as a result.

My proposal is to have running water where normally there would be a fire.

This would be achieved by collecting water into a tank of water on the hill above the hut. A pipe would run underground from the tank into the building, inside the wall, above the fireplace so that water would flow down the chimney onto the hearth. The water would then drain through the floor and out of the building. It should be a fairly simple matter to create a head of pressure to force the water to the required height.

The flow of water down the chimney would be determined by weather conditions – possibly being reduced to a drip or drying up completely in summer.

The remains of Ebenezer is of dry stone construction and will be repaired as such – using as much stone from the existing structure and site as possible. 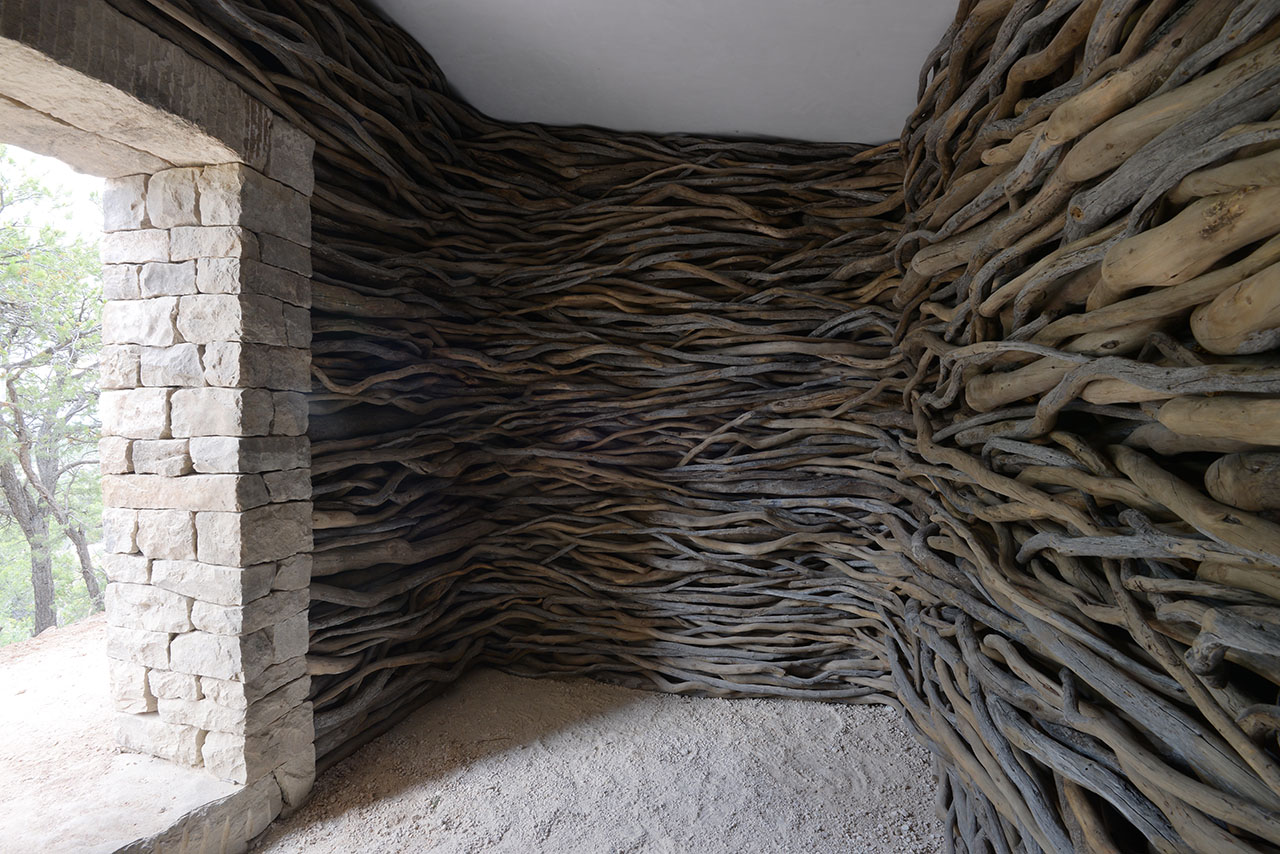 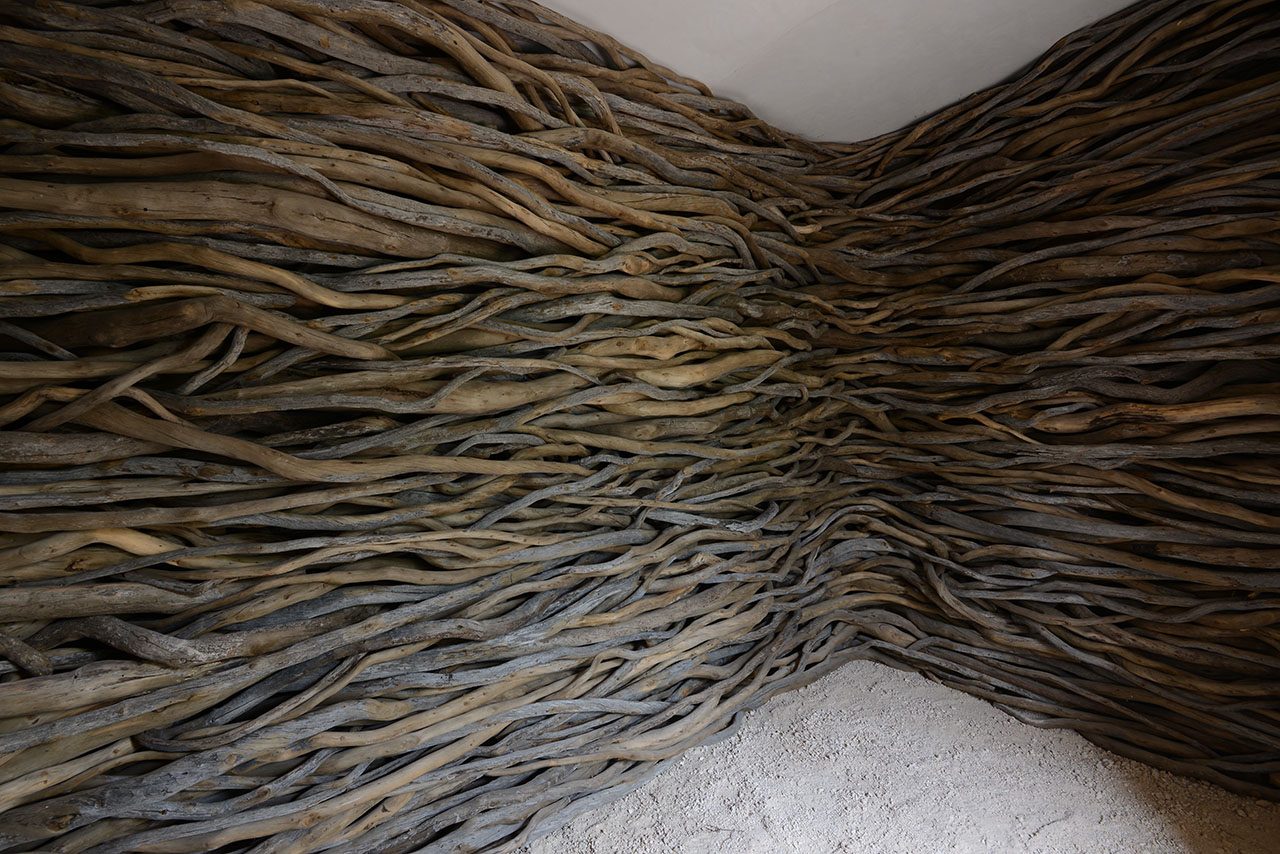