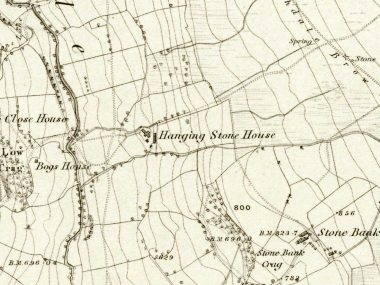 The historic building recording of Hanging Stone House reported that the existing building was most likely to have been developed during the late 18th or early 19th century as a Hogg House (Scott and Snowden 2017). That interpretation was revised due to the evidence uncovered during the watching brief, with the building now being recognised as a byre or possibly a stable. This was due to the evidence of the now-revealed stone flagged and cobbled floor, which shows the presence of three stalls at the northern side of the building with clear boskins between. The floor also contained a flagged foddergang to the south side of the building with a stone gutter-drain separating this from the stalls.During the watching brief, the flagged floor of a later building attached the south side of Hanging Stone House was also uncovered. This building was noted on the 1854 OS map, however by the 1950 OS map, it appears to have become unroofed and fallen into disrepair. The floor within this second structure also indicated that it was a cow byre or stable.

The stone flags which made up the floor, measuring an average of approximately 0.90 m long x 0.40 m wide, sloped from east to west, following the natural slope of the hillside and creating drainage within the former building. The slope of the floor provides strong evidence for the use of the building as animal accommodation.

Other physical evidence, noted within the external face of the south wall of Hanging Stone House comprised a horizontal cut-out, measuring 0.32 m long cut into the stonework, towards the eastern end of the wall. This cut-out included a small vertical angled cut at its western extent, which suggests it located a wooden trough. Above this were two square, angled holes, cut into the stonework, with a circular hole, which is clear evidence for the former presence of a hayrack in this building. Taken together, the evidence of the slots for the hayrack and trough, as well as the sloping flagged floor, clearly demonstrate that the building which abutted the external south wall of Hanging Stone House was created to serve as animal accommodation for cattle or, possibly, horses. The long form of the building suggests that a use for cattle is more likely.